Well, I guess it’s not looking too good for our Charlie Cat. As of this evening, it’s 6 days since we’ve seen him. His habit was to sleep inside all day and prowl most nights except in cold weather, usually jumping on the low roof outside our bedroom window anywhere from 2 to 5 times per night to scratch at the window and wake me up to let him in for a snack. Which I unfailingly did; often to the detriment of my physical and mental health. If I did not respond to his scratches there, it usually meant I would lie awake for over an hour as he continued, and then finally relent anyway.

I know you are supposed to keep your kitties inside, but he was a little terror if 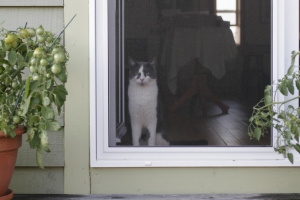 you didn’t let him out at night. First he’d pick at the door’s weather stripping until it was shredded. “pic, pic, pic…”. He’d often wait until we were in bed. Then he’d start an escalation of biffing things off my desk or a book case or the kitchen counter. We got good at hiding the smaller, especially breakable, stuff each night, but not always. Then if all that failed, he’d pick a fight with another cat, often it was elderly Coco (now deceased) who had no teeth or claws. He seemed to know that that was the final straw, and it would be , “Okay buster, out the door!!”

We’d adopted him as a 4 month-old scrawny kitten from the SPCA 10 years ago this fall, all gangly legs and a purr that had led his fosters to call him Rumble. I was looking for a brown tabby, but he picked Edward and made a point of being noticed. He was the first cat we adopted together; we each had brought a cat into our relationship, Edward’s Coco and my Sophie.

He wasn’t all that cuddly with us, he seemed to prefer the other cats for snuggling. Charlie used to get all cosy with Sophie Cat

(also now deceased), and pile on top of her as she snoozed peacefully in her own cat basket, and once he was well nestled in and she was accommodating him, he’d suddenly start chomping on her neck. Growling would ensue, until she’d get fed up and leave the cat bed to him. “Mission accomplished,” said the thought balloon above his head.

Eventually he traded Sophie for his younger-brother-from-another-mother, Spirit, who started out a third of Charlie’s size and had since well-surpassed him in length and girth. He didn’t chomp on Spirit though, Spirit is g 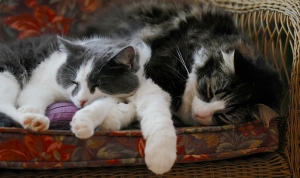 entle but not to be pushed around. No, Charlie used Spirit as a body warmer/pillow I think, cuddling up not on top of him, but beside. I doubt they hung out together outside; we kept Spirit from being an overnight prowler most of the time. Charlie probably wasn’t interested in having a companion on his routes. I could almost hear him saying, “Beat it!”

Charlie always brought his catches home, mostly voles, deer mice, shrews, often headless or all-consumed but for entrails. Yum. He has on occasion found a rat who had probably been hiding somewhere between the compost pile and he chicken coop, as well as a weasel or two. Should’ve left the weasels to deal with the rats.

Having spent the previous year pretty sleep-deprived and at the end of my rope due to this cat, I was happy that last winter he seemed to settle in and didn’t fuss about getting out at night. I thought, “Yay, he’s 10 now, maybe as a senior he’ll mellow-out and I can sleep again!” He even cuddled between us on the bed, although it seemed he really had his eye on Alfie Dog for snuggles rather than us. She, however, is wary of cats, having been smacked on the nose once too often I guess, so if Charles came her way she’d do an about-face and show him her butt. He proved, however, quite content to nestle his head into her fluffy tail and fall asleep.

He was great at relaxing. I could’ve learned a thing or two from him. Indeed, occasionally, very occasionally,  I was tempted to take a nap in the afternoon sun after seeing him stretched out on the window sill or on the ottoman in a sunbeam.

By the time the warmth of summer returned, he was back to his old tricks, and out he went at night. Over the years he’s only had two major mishaps that we recall: One was a bad bite on his back that caused an infection close to his spine. It required surgery and antibiotics to resolve.

The other was a close encounter of the skunk kind. I remember one night letting him in the upstairs bathroom window around 3:30 a.m., and stumbling downstairs after him to give him a bite to eat, only to start worrying about the smell in the house. In my stupor I said, “Edward, there’s some kind of gas leak or something, an awful smell like gas….or rotten onions… or something…!” This was before we had a propane stove. “Furnace oil doesn’t smell like gas,” he muttered from under the covers. “I don’t know, there’s something awful!” I maintained.

He got out of bed and shuffled down the stairs. Then he headed for the basement stairs to check and humour me, although now he was smelling it too. Charlie went to follow Edward to the basement. And as he passed me, it clicked. “It’s CHARLIE!! SKUNK!!!” and I grabbed him and threw him back outside! No way that was going to get all over our furniture and smell up the adjacent treatment room for Edward’s work.

Lucky to live in a factory town (well, Michelin) where shift work calls for a 24-hour grocery store, Edward headed off to Sobey’s to buy some peroxide and Dawn dish liquid, as well as fresh baking soda, the ingredients to the proven de-skunking recipe we were told about by my then sister-in-law. Charlie had taken off by the time Edward got back, but once we found him at the door at 7 a.m., we were ready for him. That stuff works. They say bathing a cat is a dangerous idea, but I think Charlie was so sick of the smell himself he cooperated nicely.

So, perhaps last Sunday was his final adventure. Hard to say with cats, sometimes you hear tales of them turning up after several months. They wouldn’t have written that song, “The Cat Came Back” were it not so. But, we are far from our neighbours; the closest have checked their sheds and around the house. Alfie and Edward and I have roamed our property calling, but there are 38 acres, mostly wooded. He could be anywhere, or nowhere.

And best guess is an owl, or perhaps even a coyote, got to him. We’ve seen large owls in the evening on occasion, in the trees near the chicken coop. And there is scat on the trail into the woods, possibly coyote.

So, we’ll keep an ear out, but as this has never happened before, I don’t hold out much hope. 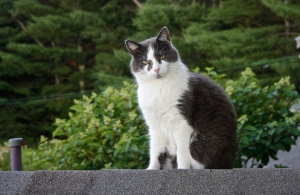 Charlie The Brat, you were cute, and very occasionally snuggly when you wanted something. You definitely had personality (oh yes, I forgot to mention your special talent of whining while squinting your eyes at us, front feet turned outward in defiance, when we didn’t accede to your demands.) I suspect I will miss you, the house seems different already.

This past year has been really tough on the pets in this house with Angus’ cancer finally being too much just under a year ago, and little old kitties Rosie and Jack, succumbing to old age illnesses in the couple of months that followed. It’s been tough on us too, emotionally. Quieter and quieter, losing long-term companions. Re-homing the chickens for our move added to that sense of emptiness. I was sure Charles would be around for another 10 years to torment me. I occasionally wondered how I might build a padded room to put him in at night…or more likely, myself. 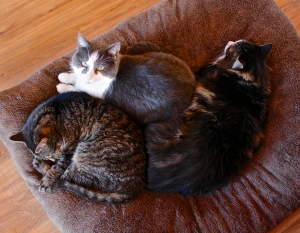 And there he was, gone.

Charles the Brat Cat, Squirt, Li’l Bugger. It hasn’t hit me yet, how much I’ll miss you, but I suspect it will one of these days when I find myself roaming the house in the middle of the night for no reason, feeling like something is missing. I love you, Charlie Winkle. Maybe you’ll magically come back. But if you don’t, I sure hope you didn’t suffer.

“Love to eat them mousies… mousies what I love to eat! Bite they little heads off, nibble on they tiny feet!” (from a cartoon by B. Kliban.)