(Written a week ago).

It is weirdly quiet in the house today. There’s a brisk wind outside I can just hear in the rumble of higher gusts, there’s the humming of the furnace and the refrigerator. And now as I write even those have paused.

I’m sitting at what has been Edward’s desk for the past 5 years, in the office addition of our home that first housed my photo gallery and most recently was Edward’s massage clinic. The room to the right of me has sunlight beaming in, with nothing to interrupt its path across the floor.

Spirit Cat has curled up in a waiting room chair, and Alfie Dog snoozes at my feet under the desk. In our house of dwindling critters (sadly, dear Rosie Cat had to be euthanized about two weeks ago due to kidney failure), only Charlie is not sharing this room with us today. He prefers the comfort and solitude of our bedroom upstairs most mornings.

There’s a lot missing from the clinic today… the bench at the entrance, one of the wicker chairs in the waiting room, the altar table and massage table and stool, as well as all the sheets, heating pads, tuning forks, salt lamp, lotions, pillows, and more, from the treatment room. And, of course, Edward.

Not to worry, no crisis here. He has simply started work today in his new office in town.

But it feels so strange, and a little lonely.

Not that operating a massage clinic at home, in a separate addition to the house, is all that noisy, but usually, at least once a day, a few hearty chuckles make it through the walls from Edward and/or his clients as they chat. He has such a down-to-earth, to-the-point manner that catches people off-guard sometimes, especially as he challenges them in a loving way, that the eruption of startled laughter is a frequent occurrence.

So, I’m missing the murmur of conversation and the odd guffaw on the other side of the walls today. And the brief encounters for a quick coffee and a snack during breaks. And the office phone, rerouted to his new space, no longer rings here.

It’s strange how just the difference of one person (well, I guess one person plus one client at a time) changes the feeling of the entire property for me. It shifts the routine too, since we are a one-car family, this means I will either spend the day here without a means of getting to town or I’ll drive him to work, which I did today. That probably makes things easier for me in a way, as then Alfie gets to come along for the ride and see where I have left her hero. She LOVES car rides. And she LOVES, no… ADORES Edward. 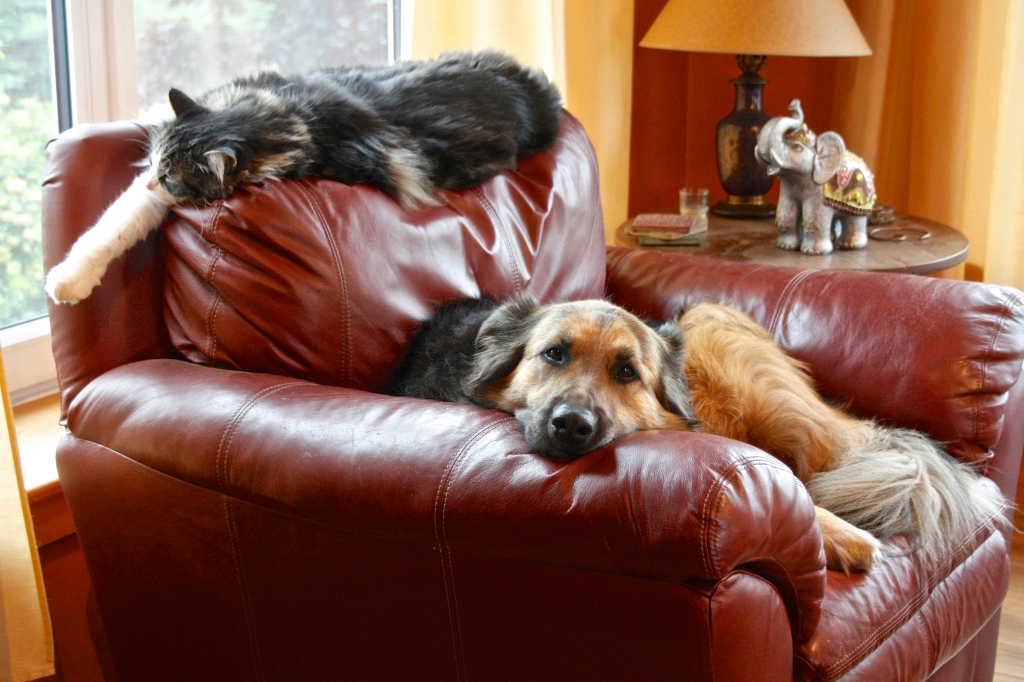 Were he to leave the house on his own as he often does to do errands and such, she pretty much pines at the doors until he returns, looking out one window or the other to see if she can be first to see him coming back up the driveway. I am, it seems, a mediocre substitute.

Somedays when he has gone to town for something and I am here and try to take her for a walk, she resists unless I leash her, preferring to wait at the top of the driveway, watching for him. Today, his first day at the new office, she got to see where he was dropped off, and while I did put her on the leash for our walk when we got home, there was no sign of resistance. I think she understood that he wouldn’t be back without our picking him up.

I know some of the quietude here is also due to our recent loss of sweet Rosie Posie. Not that this old kitty was noisy, but we had our routines too. A tiny, 17-year-old calico, she lately slept most of the time, day and night, but for a few daily habits. In the morning as we sat at the breakfast table she would get up from her kitty bed on the ottoman by the window and come over to make a small but sharp request for Edward’s attention. It’s difficult to reproduce her sound in writing, but it was more akin to a squawk than a meow.

She’d stand by his chair looking up at him, her wee white paws with heels together, toes slightly turned out, and make her plea, and he would scoop her up and pull an extra dining chair over beside him so she could sit by him and get a few scratches under the chin. She was not at all interested in his sausages like Jack had been (who’d been known to steal them right off your plate if you weren’t looking). But as soon as Edward finished his meal it was cuddle time, and this little bean-bag-like cat could be held mostly with one hand, with her paws up on his shoulder, and would purr and purr and rub against his face and waggle her tiny toes, kneading him or the air. Edward called her the “Gund” kitty, like the soft stuffed toys.

I know, it sounds like any other cat probably. But this was our Rosie, who would repeat the ritual quite often at dinner in the evenings too.

And because she’d had thyroid issues for the past year or two, part of my own routine was to pill her twice a day, which sometimes proved challenging as she was expert at popping them back up out of her mouth, tasty salmon “Pill Pocket” and all. I had spent about a year and a half medicating both Jack and Rosie, each twice a day, with what they needed for their respective ailments. And it seems I spent an inordinate amount of time every day hopping up from my desk to serve my feline masters  (don’t forget there were and still are Charlie and Spirit as well), as they seemed to all beg for either food or a door opening on their own individual schedules. I am obviously well-trained.

So, there’s that piece of the picture missing now too. And it feels a bit too close on the heels of Angus’ and Jack’s passing before Christmas, as well as the recent re-homing of our chickens. I notice the gradually diminishing feeling of liveliness and activity here on the farm. Edward has even removed so many of his junk piles now (you know, those reserves of lumber and fencing and other building and gardening materials that he might need someday) that it is becoming clear that no new projects will be initiated here.

If only I enjoyed the seemingly relentless wind these days, maybe I’d feel there was enough movement.

But as spring warmth and growth seem elusive, I am still feeling stuck in that in-between zone, between seasons, between lives almost….

Edward has started a new phase of his life by working again in town, with a new space, and new professional colleagues, and it seems to have energized him as well as his practice. And I am still here on the farm that is no longer a farm, (albeit only ever a “hobby” farm), trying to maintain a state of realtor-ready tidiness. We have even avoided starting seeds this year, anticipating, or hoping at least, that we will not still be on this property to see them through to harvest.

I find myself holding my breath a lot.

No chickens to fly the coop.